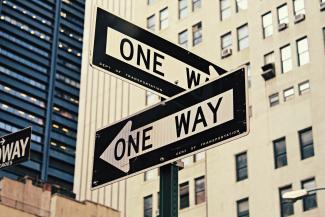 When It Comes To Change You Are Of Two Minds

From the desk of Managing Director, Aaron Lieberman:

For many people change can be intimidating. I’m sure many of you reading this have struggled with the prospect of change at some point or another in your own life. The overthinking, over analyzing and self doubt you experience can swirl up around you like a tornado and lead you to make rash decisions without fully understanding the implications of your actions.

If you’re someone who struggles with change, I strongly suggest reading the article below and picking up the book, Switch: How to Change Things When Change is Hard, by Chip and Dan Heath. When I faced a major change in my professional life, I turned to this book and discovered a concept developed by psychologist Jonathan Haidt and expanded on by the Heath brothers. The concept is a metaphor for change. It suggests that all human change relies on three factors, Directing The Rider, Motivating The Elephant and Shaping The Path. The Rider represents our rational side, the Elephant represents our emotional side and the Path represents our environment.

The change I faced was starting my own Financial Planning firm, Marathon Wealth Management as it is known today. After an 18+ year career at Wells Fargo Advisors, I knew it was time for a change, but the prospect of that change was overwhelming. The Rider in me partook in a tremendous amount of analysis, which led me to initially begin in a different direction, before venturing back towards the path I would ultimately go down. The Elephant however was emotionally connected from the start. I believed that this switch would be better for my clients, which meant it would be better for us as well.

How about you? Are you facing a change in your life or finances that you find to be overwhelming? Let us help you Direct Your Rider, Motivate Your Elephant and Shape Your Path. You may even find that a little switch can be exciting!

WHEN IT COMES TO CHANGE, YOU ARE OF TWO MINDS

In the Happiness Hypothesis, psychologist Jonathan Haidt wrote that long ago he developed a metaphor to help him make sense of his often self-sabotaging behaviors:

The image that I came up with for myself, as I marveled at my weakness, was that I was a Rider on the back on an Elephant. I’m holding the reins in my hands, and by pulling one way or the other I can tell the Elephant to turn, to stop, or to go. I can direct things, but only when the Elephant doesn’t have desires of his own. When the Elephant really wants to do something, I’m no match for him.

Later he realized a broader application to his metaphor. He wrote that to understand the most important ideas in psychology, we need to consider how the mind is divided into parts that sometimes conflict. The Rider represents our rational side that engages in conscious, controlled thought and can plan for the future. In contrast, the Elephant represents our emotional side including visceral reactions, intuition, and our need for more immediate gratification.

He also explained, “The Elephant and the Rider each have their own intelligence, and when they work together well they enable the unique brilliance of human beings.”

When Chip and Dan Heath wrote their best-selling book Switch: How to Change Things When Change is Hard, they adopted Haidt’s metaphor as the organizing theme in their book. They also added a third element, the Path, which represents the environment or context in which the Rider and the Elephant operate.

According to the Heaths, all human change—whether large or small—depends on these three factors:

They write that when change efforts fail, it is usually the Elephant’s fault because most types of change usually require short-term sacrifices for long-term payoffs. In other words, the Rider can’t keep the Elephant on the path long enough to reach the desired destination:

Most of us are all too familiar with situations in which our Elephant overpowers our Rider. You’ve experienced this if you’ve ever slept in, overeaten, dialed up your ex at midnight, procrastinated, tried to quit smoking and failed, skipped the gym, gotten angry and said something you regretted, abandoned your Spanish or piano lessons, refused to speak up in a meeting because you were scared, and so on.

In other words, the Rider can’t keep the Elephant on the path long enough to reach the desired destination. On the other hand, the Rider can get stuck in analysis paralysis and never take action.

Therefore, your change strategy needs to appeal to both—the Rider provides the planning and direction, and the Elephant provides the energy.

To make progress toward a goal, whether it’s noble or crass, requires the energy and drive of the Elephant. And this strength is the mirror image of the Rider’s great weakness: spinning his wheels. The Rider tends to overanalyze and over think things. … A reluctant Elephant and a wheel-spinning Rider can both ensure nothing changes. But when Elephants and Riders move together, change can come easily.

In addition, there is one more important element to consider. The Heaths call this third factor shaping the Path and explain that what often looks like a people problem is a situation (aka environment) problem.

They explain, “When you shape the Path you make change more likely, no matter what’s happening with the Rider and Elephant.” Shaping the Path considers the needs of the Rider and the Elephant, and puts in place conditions that support the change efforts of both.

Chip and Dan Heath also suggest the development of habits and routines as ways to shape the environment because they create a kind of “behavioral autopilot.” In addition, they encourage the use of checklists to remind us of important behaviors that might otherwise be overlooked.

In other words, the Heaths believe that in order to make the changes that are important to us, we have to influence our hearts, minds, and our surroundings:

We can say this much with confidence: When change works, it tends to follow a pattern. The people who change have clear direction, ample motivation, and a supportive environment. In other words, when change works, it’s because the Rider, the Elephant, and the Path are all aligned in support of the switch.