OAR’s Top RUN Fundraisers Say,
Go Ahead and Break It!

The Organization for Autism Research has just awarded $223,000 in research grants, has successful programs to continue and another round of scholarships for individuals with autism approaching. There are also new demands including putting their new publication, Life Journey through Autism: A Guide for Military Families, in the hands of military families around the world. OAR’s need for money to meet the demands of these programs in 2011, its 10th anniversary year, will expand.

Thankfully, OAR has a committed core of RUN FOR AUTISM individual and corporate fundraisers and new ones signing up every year. Three of those fundraising stars shine brighter than the rest because they represent the pinnacle of what is possible. One is the current OAR record-holder; the other two are within striking distance of breaking the current record. 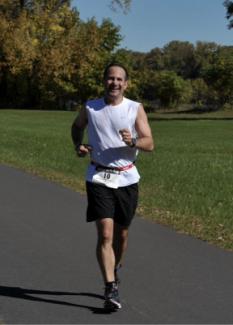 Aaron Lieberman is the current fundraising champion at $17,000, a record he set in 2004 as OAR’s first runner in the Chicago Marathon. He didn’t stop there though. In 2006, he raised $15,000 while running the Marine Corps Marathon.

He’s been a runner for 15 years, but it wasn’t until his son, David, 12, was diagnosed with PPD-NOS in 2001 that Lieberman began wondering what he could do to help his son and others on the autism spectrum. “I got involved with the local Autism Society of America chapter and knew about the walks they do but I really wanted to run for autism.” In 2004, the year he turned 40, Lieberman decided to run the Chicago Marathon and raise money for OAR, which he found through searching the internet. It was there, among family, that he set his personal record in 2001.

There was a hitch though. OAR had started its RUN FOR AUTISM program the year before and the only marathon OAR was officially affiliated with was the Marine Corps Marathon. Lieberman didn’t let that stop him. He picked up the phone and called OAR Executive Director Mike Maloney and told him what he wanted to do. “He told me that OAR wasn’t affiliated with an organization in Chicago yet, but I should do what I can and OAR would lend support as needed.”

His fundraising philosophy, he explains, was based on one core concept: “I wanted it to be easy for people.” He settled on sending out financial support e-mails because, he thought, it would be easy to pay attention to, disregard, or delete. Lieberman also decided to send the e-mail out to as many people as possible. “I thought it would be great if I could get 1,000 people to give me $10.” In addition to sending his own e-mails, he asked a few key friends and family members to send the e-mail out to their contacts as well. To Lieberman’s delight, no one gave $10. Everyone gave more. “The first donation that came in was for $400 or $500.”

In his professional life, Lieberman is a financial advisor and an avid runner in his free time. Setting and meeting new goals, get him pumped up. “It was really exciting to see my goals being reached.” Each time he got close to his set goal, he raised it so people wouldn’t think he didn’t need their donations.

As a goal-setter and believer in OAR’s mission, Lieberman’s advice for others out there is to go ahead and break his record. “I hope someone raises $50,000. I would enjoy trying to beat that record next time.”

Lieberman, who interviewed Maloney during their initial phone conversation to make sure that at least 80 percent of the money he raised would go to programs and not overhead, says that the bottom line for him was that “OAR would make a difference in the lives of people with autism and their families today. Lots of organizations are out there trying to find a cure but families also need help right now dealing with autism.”

The staff and the administration of the College Experience are always overjoyed when our students go on to become successful alumni and pursue new achievements. We are also extremely fortunate when alumni choose to remain in the area and continue to make contributions within the realm of Living Resources, Inc. But once in a while, these achievements enter our collective universe like a seismic shift and break new ground. These accomplishments make them role models for current students who will hopefully follow in their footsteps someday!

With that said, the College Experience wishes to offer their heartfelt, congratulatory wishes to David Lieberman who has just been selected to join his former staff members and teachers as their new colleague! Living Resources, Inc. always tries to “walk the walk” and give our individuals the chance to flourish as employees of the agency. They are oftentimes working under the mentorship of supervisors in the main office at 300 Washington Avenue Extension in Albany, NY. (One of our former students has even earned his own cubicle!) This is, however, the first time in the thirteen year history of the College Experience that an alumnus is now an official staff member.

David is currently immersed in the Orientation that all new employees must go through whether they are the receptionist or a new associate executive director. David has not only been a model student, but he is also a seasoned public orator with his public speaking videos having accrued thousands of views on Facebook. David has spoken at Mercy College, our recent Golf Tournament at the Colonie Country Club, and is slated to deliver a talk to education students at Hobart and William Smith Colleges in Geneva, NY! David speaks eloquently about his journey on the autism spectrum as well as the hurdles overcome during his early years through Applied Behavior Analysis (ABA) Therapy. Like all of our students, he receives plenty of support from family and close friends from back home. David has also made strides in the hospitality industry since his graduation this past May and has been employed by the Marriott Hotel.

David is featured in this photograph with Jennifer Richard who is the director of the College Experience as they stand in the lobby among the artwork of our talented individuals. He will start off with clerical duties and occasionally working with the students. But his potential seems to be limitless, and we expect great things from him in the future!